So, as promised, I hunted down the line of code that was causing the P60 error. After I found it, acting on my immense coding experience and technological wizardry, I deleted it. What could go wrong?
Well, the AI pathfinding could break. That could go wrong.
So, I've been spending most of my time tweaking code and rewriting stuff. Not a lot of overt progress on the game, but I think maybe that there won't be annoying errors in the next iteration.
Posted by DrDinosaur at 8:18 AM 3 comments:

First: THE DEMO IN THE PREVIOUS POST HAS A FEW BUGS, MOST NOTABLY THE P60 ERROR. WHILE STILL TECHNICALLY PLAYABLE IT IS SORT OF UNPLEASANT. SORRY ABOUT THAT.

Okay. So. It is apparent that there are a few problems with the previous demo.
Well, probably more than a few.
But, that's (sort of) why we have tests-so this shit doesn't happen on release.
So, my main priority right now is figuring out what the fuck is going on with that error. I know it has something to do with the pathfinding code, so I don't have to go digging around all 13,316 words.
Oh, did I mention there are 13,316 words? There are, which means I have had to move up to the .gblorb file format, meaning that you'll need a new interpreter. I linked to an appropriate one in the previous post, so go ahead and click on that.
Anyways, gotta fix the P60 bug, as well as a few grammar rules. After those horrendous mishaps are taken care of, I'll add some more game-breaking stuff, like the ocean, and escape pods. I'll also try to flesh out the pathfinding routines.


Sorry about the bug, and I hope you enjoy what's coming up.
Posted by DrDinosaur at 7:47 PM 2 comments:

First! The link!
THE GAME
And you'll need an interpreter, depending on your operating system.
WINDOWS
MAC
UN/LINUX

What's new!
CONVERSATIONS. Initiate a conversation with "Hello [NPC]". During conversations, you can "ask" "tell" "give" or "show" a subject. End conversations with "Goodbye". NPCs can be either helpful or unhelpful. The information they give may change depending on that. Additionally, subjects are based on knowledge, so you can't ask about a thing you haven't heard of or seen.
DISASTERS. There are three new disasters. Also, both the monkey wrench and steel wrench will work to fix the air filtration unit (Though they can no longer be weapons). Rising water will be accompanied by a short text blurb.
SPAWNING SYSTEM. You will now begin the game as a random class. Accompanying this  change is a new AI system. Disasters will increment the Alert Level. NPCs will change their course depending on this.

Also, I made maps of the beginning area: 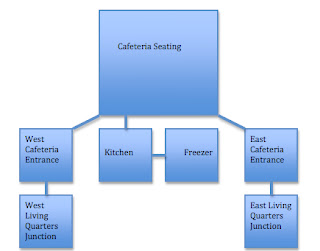 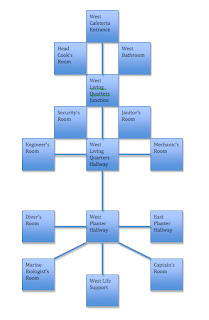 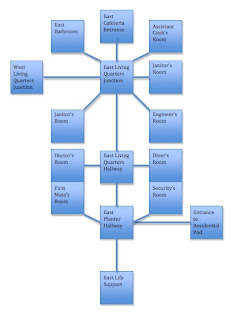 Three days until the release of the next demo.
Still writing dialogue.
List of what will be new:
Conversations. You will be able to talk with NPCs. The dialogue will be somewhat limited, but the functionality will be there.
Spawning System. You will now spawn as a random class at the beginning of the game.
More disasters. A few in-your-face disasters will be added. Primarily of the gigantic monster appearing sort.
Alert levels. This is slightly more behind the scenes, and won't make itself as obvious, but a lot of disasters will trigger an alarm and a reaction from the NPCs. There aren't any escape pods though.

Thanks for the support and kind comments everyone. You're awesome.

Oh, and I currently have a guy working on the graphics. I'll post samples when I get the chance, but I just wanted to let you guys know that, when it comes time to add graphics, all I have to do is add the functionality, not spend time actually making them.
Posted by DrDinosaur at 8:35 PM 7 comments: