First, the bad news. Definitely won't be getting anything out by tomorrow. Look for something next Friday.
Next, the progress update.

For esoteric reasons that I cannot recall, it became imperative to me to figure out the spawning system. Now, I left it out of the previous demo because I didn't have time to properly figure it out; the AI movement overruled the player's decisions (since the system was basically you possessing one of the NPCs) and made player movement next to impossible. So I obviously needed to fix that. My first thought was to make a schedule chart (at 7:30, if the player is not the doctor, send the doctor towards the med bay, stuff like that). However, this is a terrible solution. Why? Because, in the middle of a disaster, if the time is 7:30, the doctor will, no matter what is happening around him, look at his watch and dash off to work.
So, I threw in an extra layer of checks. There's now an "alert system". Disasters will raise the alert level (by differing amounts based on the severity of the disaster). Depending on the danger level, NPCs might be pointed towards repairing areas of the ship, pulling in from the ocean, or straight-up evacuating. At some point I'll also want to get it so that there are different sorts of alerts; food poisoning won't freak the mechanic out, but the doctor will be rerouted to the clinic.

Speaking of the mechanic, I wrote his dialogue today. I won't tell you exactly what his default response is, but I will tell you he is very invested in constantly tweaking the machinery.
Posted by DrDinosaur at 9:07 PM 3 comments:

Still working on the dialogue.
Wheeeeeeeeeeeeeeeeee.
I'll try to have everything in by this Friday, but I don't think I'll make it; I still want to add more events as well as the ocean.
Also, I have finals in a week, so look for a demo in the next two weeks.
Posted by DrDinosaur at 5:50 PM 1 comment:

A Word About Conversations

Working through conversations, and I thought I'd describe how it works.
Conversations can only be between two people. Starting a conversation with a second person will end it with the first.
Conversations are started with the command "(say) hello (to [character])." Only the "hello" is necessary; the engine will attempt to disambiguate what you mean in most cases (Hello will default to a random person; other examples, such as "take log" when you can see a burnt log and a smelly log, will ask you which one you meant) but specifying the exact character is generally a good idea.
I previously stated that talking would be built off of a node system. For the purposes of simplicity, I've decided to scrap that. Pressure is not a heavily social game, and the benefits of a node system would largely go unused. Instead, I am using a traditional ask/response style. Conversational commands include ask, tell, show, and give. Typing "Show Cook the frozen fish" will check if there is a default response for the cook for showing the frozen fish, then check for a default showing response, and finally a default response. The consequence of this is that there will be a lot of "default" responses as I build up the conversation library.
Added on to this is a knowledge and subjects system. Inform likes to treat everything as a physical object. This works fine, until you want to discuss love with the mechanic. So, subjects allow for out-of-world ideas that can be discussed. The knowledge system compounds this. You can only discuss things that you know about. So, if you (the character) have no inkling that there's a conspiracy going on, or that a plant is murdering crew members in their sleep, you (the character) can't immediately start the game and ask about them.

I've only really completed one character's entire conversation library, so it'll probably take a while to finish all of the existing characters'. I'll keep you posted though.
Posted by DrDinosaur at 9:05 PM 5 comments:

Now that a demo's been released, what's next? Well, I had originally planned to finish adding the NPCs, and add some more disasters, and work on the spawning system. But it seems like people are wondering why they can't talk to the NPCs*. So, I'll be working on a conversation system. This will work on a node-like framework, combined with a check to see if the NPC is helpful or unhelpful. So they'll have a default response depending on if you're asking them something while they're helpful, asking them something while they're unhelpful, telling them something while they're helpful, or telling them something while they're unhelpful.
Then, of course, they'll have specific responses to particular subject. So, for example, if you're asking the Janitor about the strange plant thing, and he hasn't warmed up to you, he might just grunt. But, if you're friend to all undersea janitors, he might tell you where he last saw it.
Obviously, this will take a moderate amount of work to add in unique responses for stuff. Plus, I'm going to try to hit 12 different disasters by the next demo. So I'm thinking it'll be about two weeks before another one hits, but if that changes, I'll post it here.

EDIT: Turns out adding conversations was a lot easier than I had expected. Well, adding the framework was. I still need to write all the responses and stuff, but that just involves writefagging, not programming. There are now 2 (two!) backstories that can be uncovered by reading the right notes and showing them to the appropriate people.
Posted by DrDinosaur at 10:21 AM No comments:

Hey everyone! I hope your butts are prepared for the very latest in text adventure technology, THE PRESSURE TEXT ADVENTURE (Demo). Featuring monsters! Crew members! Notes! Weapons! Floods! Freezers!
And it can be yours right now.
How? Well, first you'll need an interpreter in order to play the file type. Fortunately, there are a wide variety of such applications, that will work on whatever device you may be using to view this page.
Windows
Mac
Li/Unix
Once you've done that, download the file here.

Now, open up that file. You should now be playing Pressure.

Now, understandably, you may get lost. You may even get killed! That's okay. Pressure is meant to be played multiple times, and this hold true to that idea. Some of the random elements include the disasters (When they happen and what they are), the crew members' names, the combat numbers and the locations of (and possibly existence of) certain notes and memos.
However, I don't want to throw you right into the deep end, so here's some help. 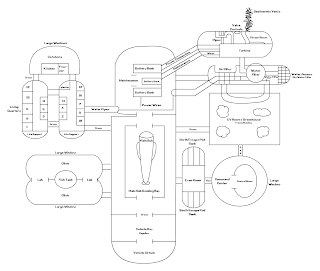 First, a map. The in-game descriptions should tell you what rooms are adjacent, but this gives you an overview.
Next, some commands:
numbers on/numbers off
Turns visible combat mechanics on or off. By default, they're off. You can switch them on if you want to see them though.
ready [weapon]
This will ready the specified weapon. You can't fight very effectively without one, so grab something and start whacking!
force/weld [door]
You need to be holding the crowbar or the welding torch for both of these actions. Forcing will open a locked door, and welding will close and weld the door. Neither have a guaranteed chance of success, so don't rely on them to escape a monster.
fix [machine]
You need to be holding the steel wrench to do this. This will repair a broken machine. (There's only one, the Air Filtration Unit)
Parry/Dodge
The two reaction commands. Parry is based off of your ready weapon's parry stat, whereas dodging is based on your personal dodging stat.

Post any other questions you have, and I'll answer them.
Posted by DrDinosaur at 5:06 PM 2 comments:

Hey everyone.
I'm having the map vectorized. After that's been all gussied up, I'll be releasing another demo.
Right now, there are only 6 NPCs and about 5 or 6 disasters. But, you'll be able to wander around the station and orient yourself before shit hits the fan. 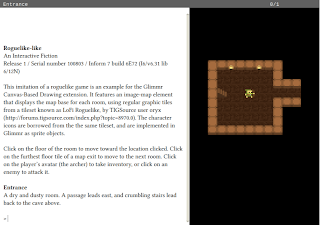 This is very far in the future, but after the game is finished (read: playable) I'll look into adding in graphics. The screenshot above shows the general idea of what you can expect. Obviously it'll be different art, but the interface should be largely the same. Additionally, the graphical version would be separate from the regular one. The regular one should be playable on most computer-like devices, or anything with an interpreter (iphones, calculators, etc.) but the graphical version would largely be reserved for actual computers.

Obviously, graphics are still a long ways off. Sorry to get your hopes up, but isn't that what Pressure is about?
Posted by DrDinosaur at 3:57 PM 2 comments: