Didn't add any items to the station today. Instead, my main accomplishment was the addition of the ability to force doors open, even if they're locked. Until I add the keycards forcing a door will always result in success (So I'm able to make my way around the station) but for release forcing a door will only work some of the time. I'm also considering requiring a crowbar to force open doors.
I also added an event that has to do with the freezer. If you spend five consecutive turns inside it, you'll freeze to death. After three turns, you'll be unable to open the door, and be trapped.
Finally, I began adding a sewer system underneath and a jellyfish that swims around inside of it. If the bathroom starts flooding, the jellyfish can swim up through the toilet.
Posted by DrDinosaur at 9:16 PM 3 comments:

Done With the Map

Finished the map today. The station is named and every room is described, and there are security doors in place (Of course, I haven't added the clearance cards, so actually opening them is a bit tricky). For the initial build I'll be using a static version of the station, rather than a procedurally generated one. However, it is organized into regions (The different pods) so a procedurally generated map shouldn't be hard to implement.
I'll be working on stocking the station with beds and tables and whatnot in the next few days.
Posted by DrDinosaur at 8:35 PM No comments:

Working on the Map

Worked on coding the map into the game today. I have all of the outer pods done, with the exception of the main command module. I'll start on the inner pod tomorrow.
Also poked around the combat system, added some new rules, and intertwined the sanity system to it. Concentration will only work for a sane person now.
Should have the map done by tomorrow, and I'll then begin to stock the rooms with the static stuff (Like tables in the cafeteria).
Posted by DrDinosaur at 7:58 PM 2 comments:

Rapidshare Link
You'll need an interpreter to play it.
Some notes:
-THIS IS BY NO MEANS REPRESENTATIVE OF THE FINAL PRODUCT. This is a demonstration of systems, displaying how electricity, time, floods, sanity, security clearance and combat will work.
-To power the flashlight, first open the flashlight, then put the battery in the flashlight, then close the flashlight. You can then switch the flashlight on and off (But the power will run out after an hour).
-In combat, you can attack, or concentrate. Your reactions are limited to dodging and parrying. To parry effectively, you have to have a weapon readied.
-Try pulling or pushing any loose pipes.
Posted by DrDinosaur at 7:04 PM 2 comments:

Update to first release (And a list of goals)

Worked on implementing the water system today. Currently, the water level values are in the game, but have no bearing on gameplay. My goal is to create some sort of rising water system which will gradually flood adjacent rooms. If an airlock door is next to a flooded room, it should (With power) automatically shut and lock. I also put in some tangible effect of the sanity system. Standing in the airlock will cause claustrophobia, and gradually decrease your sanity. During normal play, the player will hear and see things like the station creaking, or a rivulet of water. While insane, the player will hear screams and monster noises, and see things that aren't there (Or vice versa-they can miss objects). I also finished mapping out the station, but am no further in coding it in.

My goals for the Pressure Text Adventure:
-Random disasters. This is the most important part of Pressure.
-A decent AI system, with monsters and humans to take advantage of it.
-A system for handling water
-A sanity system

This Thursday I will release a small set of rooms showcasing the systems.
Posted by DrDinosaur at 9:31 PM No comments: 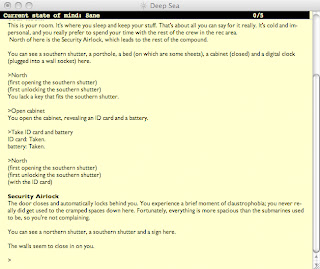 This is where you can check for updates on the Pressure Text Adventure.
Posted by DrDinosaur at 8:40 PM 1 comment: